A Manhattan judge on Friday delivered his latest blow to Donald Trump, rejecting what he called the former president’s “borderline frivolous” request to dismiss New York’s $250 million fraud lawsuit, which seeks to run his business empire out of the state.

He stopped short of sanctioning Trump’s lawyers, as he’d threatened earlier in the week, for filing what he called repeatedly rejected legal arguments — including the claim that James’ three-year probe of his business and resulting lawsuit is a “witch hunt.”

As early as her 2018 campaign for attorney general, James, a Democrat, had made it clear she disagreed with the then-president’s policies, and had promised to investigate and pursue fraud charges against his Manhattan-headquartered golf resort and real estate company, the Trump Organization.

Trump’s latest “witch hunt” argument — raised as part of a motion seeking the lawsuit’s dismissal, is invalid, Engoron wrote Friday, because it has already failed before his court, in state appellate court, and before a federal judge last year, as the former president raised it again and again to fight the attorney general’s investigatory subpoenas.

In denying the motion to dismiss, Engoron rejected Trump’s likewise repeatedly-rejected claims that James does not have the legal standing or capacity to sue him, and that the attorney general’s allegations are too old to pursue.

“Reading these arguments was, to quote the baseball sage Lawrence Peter (“Yogi”) Berra, ‘Deja vu all over again,'” the judge wrote.

The judge also rejected as “wholly unconvincing” Trump’s argument that disclaimers attached to the allegedly fraudulent financial statements sent to potential lenders — essentially warning them not to rely on his math — absolve the former president of fraud.

Finally, the judge took a shot at Ivanka Trump, who has served as a Trump Organization vice president and who is named by James as a defendant, as are her brothers Eric Trump and Donald Trump, Jr., both current vice presidents at their father’s company.

In rejecting Ivanka Trump’s separately filed motion to dismiss the lawsuit, Engoron suggested she had been less than truthful in last year’s court-mandated deposition before James’ legal staff.

Ivanka Trump had claimed she should be removed from the lawsuit because she had stopped working for her father’s business in 2017 and was not accused of personally falsifying or knowing about the falsification of any company business records.

The attorney general’s evidence links Ivanka Trump to years’ worth of interactions with her father’s longtime favorite lender, Deutsche Bank, Engoron countered in his decision. Those interactions including overseeing the financing and subsequent loan compliance for the Trump National Doral golf course in Miami and the Old Post Office in Washington, DC.

“This is despite her communications with Deutsche Bank about SFCs,” he wrote.

Ivanka Trump further claimed she couldn’t be held legally liable in the attorney general’s lawsuit, but that, too, is not the case, Engoron wrote.

“The record demonstrates that Ms. Trump received over $10 million in profits from the sale of the Old Post Office,” the judge wrote.

If the request for proposal for the Old Post Office was based on fraudulent statements of Trump’s worth, as the attorney general alleges, then the lawsuit could result in her having to forfeit some of those profits, he wrote.

“Once again, Donald Trump’s attempts to evade the law have been rejected,” James said in a statement.

“We sued Mr. Trump because we found that he engaged in years of extensive financial fraud to enrich himself and cheat the system. Today’s decision makes clear that Donald Trump is not above the law and must answer for his actions in court.”

“We look forward to receiving a full and proper review of our arguments on appeal,” said Trump attorney Alina Habba. Another Trump family did not immediately respond to a request for comment.

Biden Approval Rating Jumps As He Pivots Toward Center

Biden Approval Rating Jumps As He Pivots Toward Center 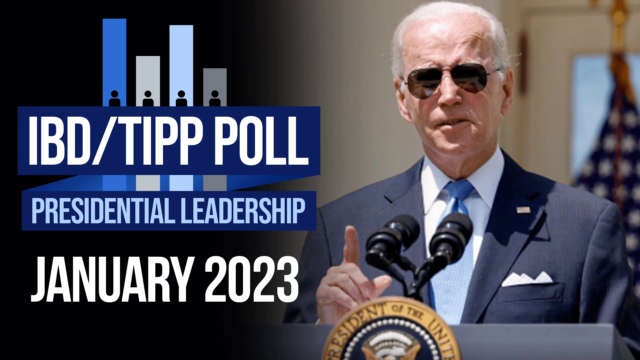 An IBD/TIPP poll in January showed President Joe Biden’s approval ratings soaring to a nine-month high as he embarked on a reign of a divided Congress.

A new IBD/TIPP poll found Biden’s approval rating rose 4.5 points to 49.1. According to IBD/TIPP presidential approval data, 49.1% of the adults who spoke out approved of Biden’s work, while 50.9% disapproved.

Including the entire survey group, 44% of American adults support Biden’s run of the presidency, while 46% disapprove. Biden’s net approval rating of -2 improved from -9 in December, to 40% approval and 49% disapproval.

What’s behind Biden’s rising approval ratings? Hard to say. Perhaps as a minority tried to usurp control of the House Republican agenda last week, Biden appeared to be a stable figure, and Kevin McCarthy was finally elected president on the 15th ballot. he is working to defuse the stigma, appearing last week past with Republican Senate Majority Leader Mitch McConnell will announce $1 billion in funding under the 2021 Infrastructure Act for a new bridge connecting Kentucky and Ohio. .

The Biden administration also announced new measures to stem the flow of large asylum seekers across the border from Cuba, Haiti, Venezuela and Nicaragua. Humanitarian groups have criticized the move, but Republican critics say the measures have been inadequate.

If Biden is moving toward the center, the Democrats may not have noticed yet. Among members of his own party, Biden’s approval rating jumped to 76%, while disapproval dropped to 16%. This compares with 71% to 20% in November and 75% to 17% in October.

All indications point to inflation as the main reason for Biden’s bad press. American employers added 10.7 million jobs in the first 23 months of the Biden presidency, including 223,000 last month, according to the Labor Department. Meanwhile, average hourly wages have risen 4.6% over the past year. But inflation has eaten up all that gain, and for many Americans it has been worth even more.

According to the IBD/TIPP survey, only 21% of adults say their salaries are in line with inflation. Meanwhile, 89% of Americans are worried about inflation in the next 12 months. This is despite a 35% drop in national average gasoline prices, as regular unleaded gasoline topped $5 a gallon in mid-June.

Investors support Biden
Biden’s investor approval ratings rose to 53%-42% from 50%-43% last month. IBD/TIPP considers investors to be those surveyed who report having at least $10,000 in mutual funds or domestic stocks.

Be sure to read the IBD Big Picture column after each trading day to stay up to date on the latest developments in the stock market and how they influence your trading decisions.

The president’s problem lies with non-investors, who now deny Biden’s performance 48% to 40%